We’re taking a break from Disney World. I know, I’ve said that before, and here we were anyway. But this time, I mean it. No, really! I really, really, mean it. I do. It’s happening. There is an entire world out there to explore. Do you hear me, Disney email deals? For 2017, we are just saying no. Don’t even try to tempt me. Don’t. Even.

So while we rack up points on our Disney Visa card while visiting other areas of the U.S. and Europe (ha! take that!), a look back on our trip to The World from this year the best way I know how: Through the food. People don’t really believe me when I say that we go there for the food, but it’s true. And now with all of the expansions going on, there’s going to be so much more to try the next time we go back. Ah! Nice try—see ya in 2020, Disney. Fine, maybe sooner.

In the absence of Toy Story Pizza Planet (which was closed as it becomes the new Muppet-themed restaurant), Animal Kingdom’s Pizzafari was a good stand-in. It’s not the best pizza in the world, but it’s a fabulous alternative to the traditional greasy theme park lunch, and the vegetables on the Mediterranean flatbread (pictured on the right), were surprisingly fresh. I am, after all, a huge fan of salad on my pizza. Is that weird?

Featuring couscous, lentils, tabbouleh, hummus, marinated olives, falafel, and a nice warm pita to scoop it all up, this was a big winner by our standards. We love to eat this way at home, so it was a good find to break up all of the alcohol that was consumed while wandering around Epcot’s World Showcase that didn’t involve a lot of grease (full disclosure: the nachos from Mexico were consumed in addition to this, shortly after). J is picky about his falafel and still gave this one two thumbs up, and I agreed. 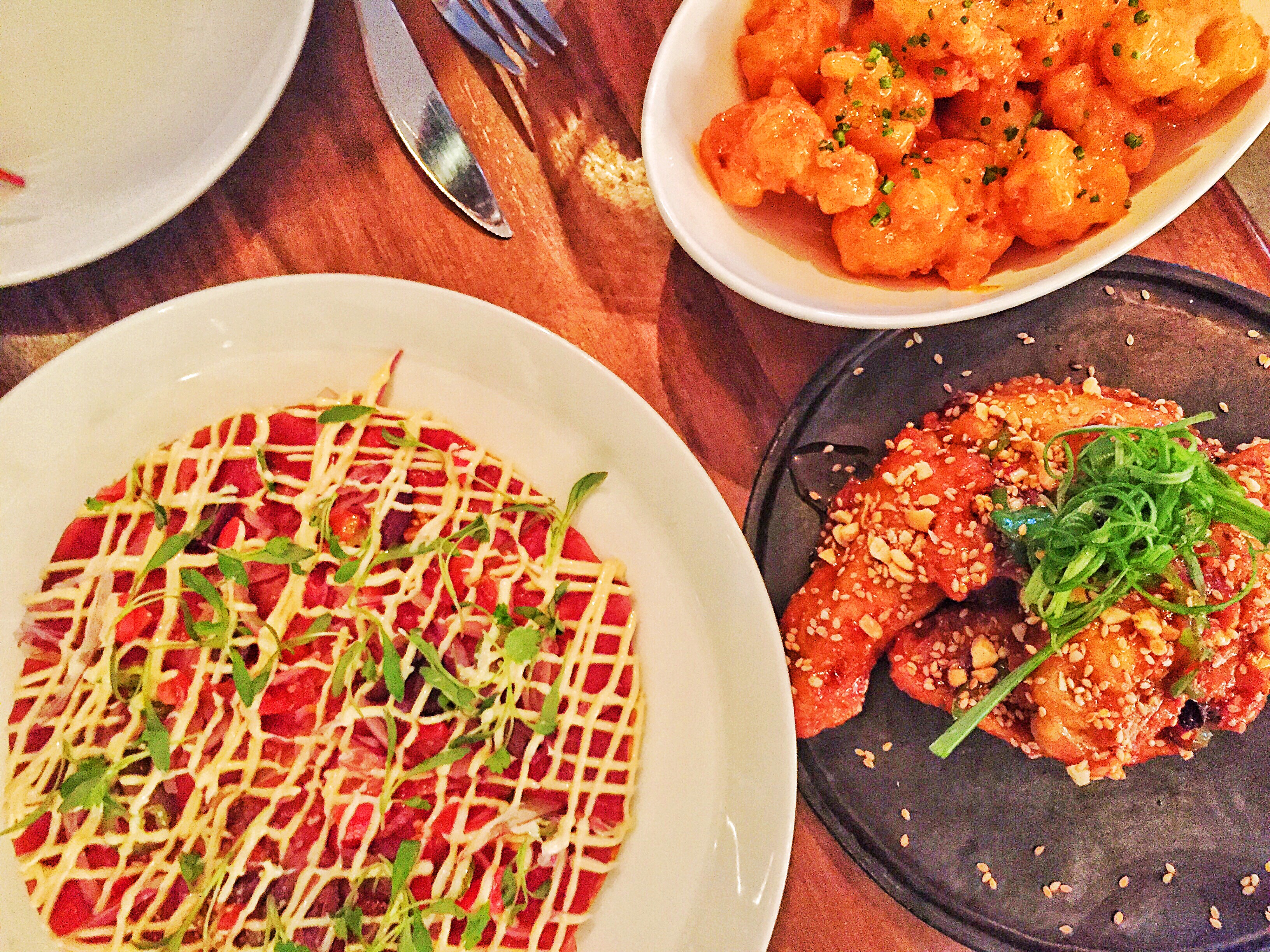 One of the biggest expansions that I’m currently resisting the urge to go visit involves Disney Springs and its rapidly expanding list of restaurants. We caught Morimoto Asia just as it was opening, and now I can’t even keep up with how many eateries have opened in just the short time since. I was really excited to give this place a try—then I read the reviews, and became a little less excited. They weren’t bad per se, I just wanted to read better. But I’m glad we went anyway, because this turned out to be a memorable meal right down to the churros for dessert. My favorite without a doubt, was the rock shrimp tempura (upper right corner). It was a lot like the Bang Bang Shrimp served at Bonefish Grill, if you’ve ever been there—super crispy in a spicy aioli. Two serving of this could have been my meal and I wouldn’t have complained one bit (I’d be too busy eating). Also devoured was the tuna pizza (left), sesame chicken wings (bottom right), and the Kakuni pork bao (not pictured). This spread plus a bottle of wine and really tremendous atmosphere had us feeling fan-freaking-tastic.

This was our second year in a row going to Sanaa, and I’m certain that it’s become a tradition we’ll stick to (whenever we go back, that is). We didn’t even have to glance at the menu to know we’d be ordering the Indian-Style Bread Service: Eight spreads/dips ranging form hummus to chutney to jam, sweet, spicy, tangy, and just plain hot. I mean, who doesn’t love dip? It really is the best way to eat. We also ordered some extra naan to go with our shared dish of butter chicken (which we also cannot live without), and paired it all with a bottle of white wine. After the meal, we proceeded to walk around Kadani Village and scheme up ways to afford a week-long stay there next time. Whenever that is. 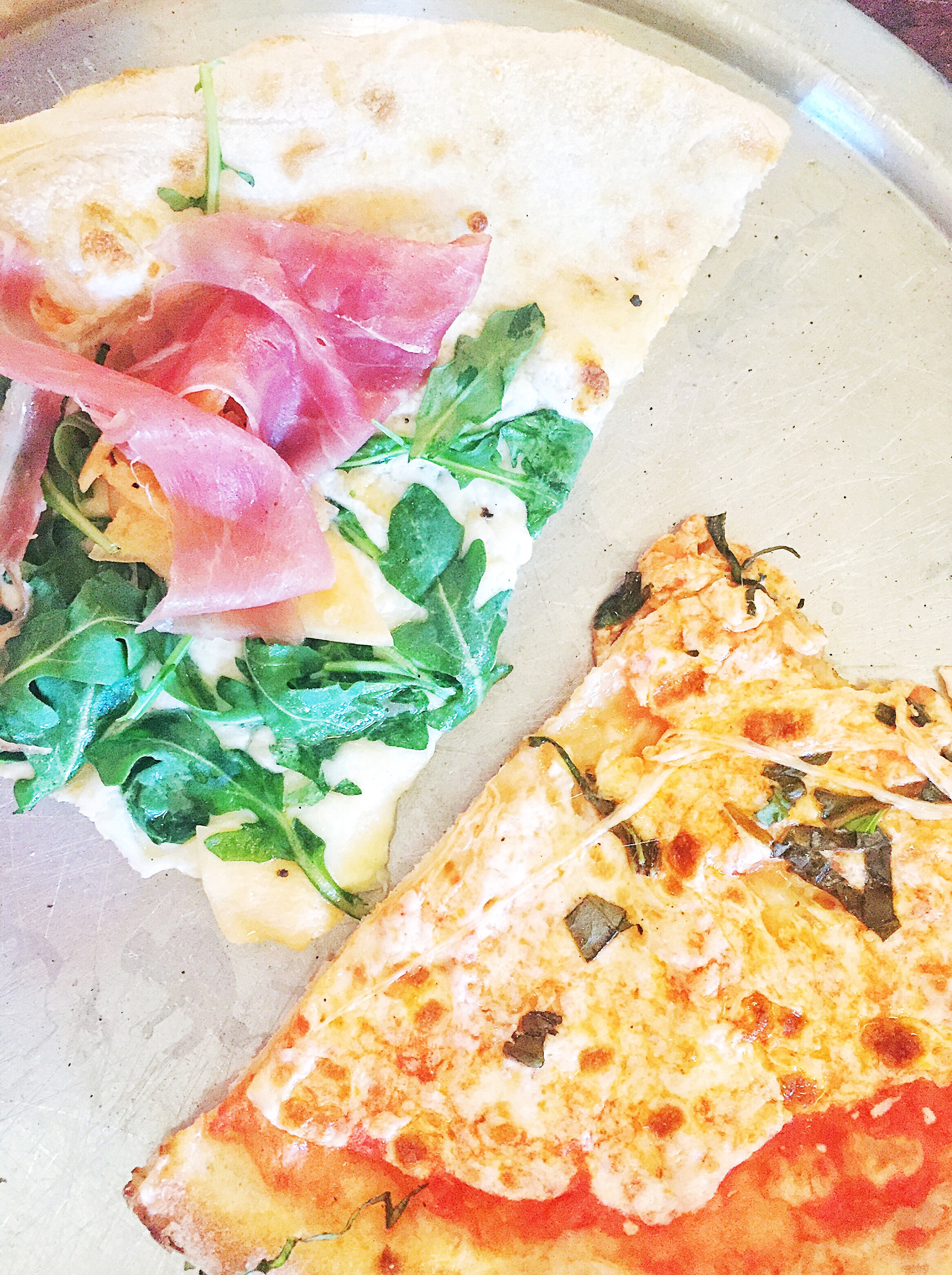 Another super-reliable, basically-a-tradition joint for us, this was our third time in a row visiting Via Napoli (from that last three Disney vacations, that is), and each time has been just as good, if not better, than the last. We paired our 10″ pizzas with a bottle of wine (noticing a theme, here?), and finished off the meal with a round of delicious fried zeppole, dipped in chocolate sauce and whipped cream. I’d go so far as to say this is one of our absolute favorite restaurants in all of Disney, and I sincerely hope that never changes.

Oh. My. Gawd. I’ve been waiting for so long (well, the amount of time it took to write this post), to tell you about Yachtsman Steakhouse. So our tradition, as it had been, is to do at least one Signature restaurant on each trip (sometimes it’s more—what can I say? We’re lushes). Having done California Grill the last two visits (and loving it, obviously), we decided to give something new a try. Disney Food Blog listed this place as serving up one of the best steaks on property—making it quite the intriguing option—and, well yeah, they were spot on. Instead of doing a filet each, we ponied up for the 32 0z. Porterhouse For Two, which also came with potatoes, sautéed mushrooms, and creamed spinach. Let me tell ya. This sometimes-usually-vegetarian eat. that. steak. We ate all of it (which is odd, since just the other night, the two of us couldn’t finish a 10 oz. filet at a restaurant here in D.C.). Could it be that it was just that good? Maybe it’s the power of vacation. Maybe it was the wine. Whatever it was, we’ll be coming back again for more. I can’t overemphasize how great Yachtsman Steakhouse was—just go. But don’t bring the kids (which, I guess they allow them? I mean, it’s Disney World, but I didn’t see any). Be prepared to spend like, $300, but it’ll be worth it. It really, really will be. Yum.

So, there it is. I’m not sure how it fits into my plan to stay away from Disney World by writing about the things I love most about Disney World, but whatever. Hopefully in 3-4 years these favorites will still be just as good as they were in 2016. Maybe they’ll be better! I can’t wait to find out. Just not next year. And that’s final!

p.s. If you care to see all that we ate and drank and have just under 14 minutes to spare, you can check out the not-very-good (but super fun!) video I made: