After visits in the double digits to our home away from home in Walt Disney World, we finally took the opportunity to visit the original, the Happiest Place on Earth, Disneyland. Orlando’s mega-resort is dubbed the Most Magical Place on Earth, which begs the question: which is more preferred: happiness, or magic? Of course, I have notes.

The entrance to Disneyland and the Magic Kingdom are largely the same. There are varied shops and restaurants, but at first glance, I’d swear we were in the place we had come to know so well, minus the soggy Floridian humidity. I could spend hours or more taking in the atmosphere of Main Street, inserting myself into Walt’s quaintly perfect vision of America. 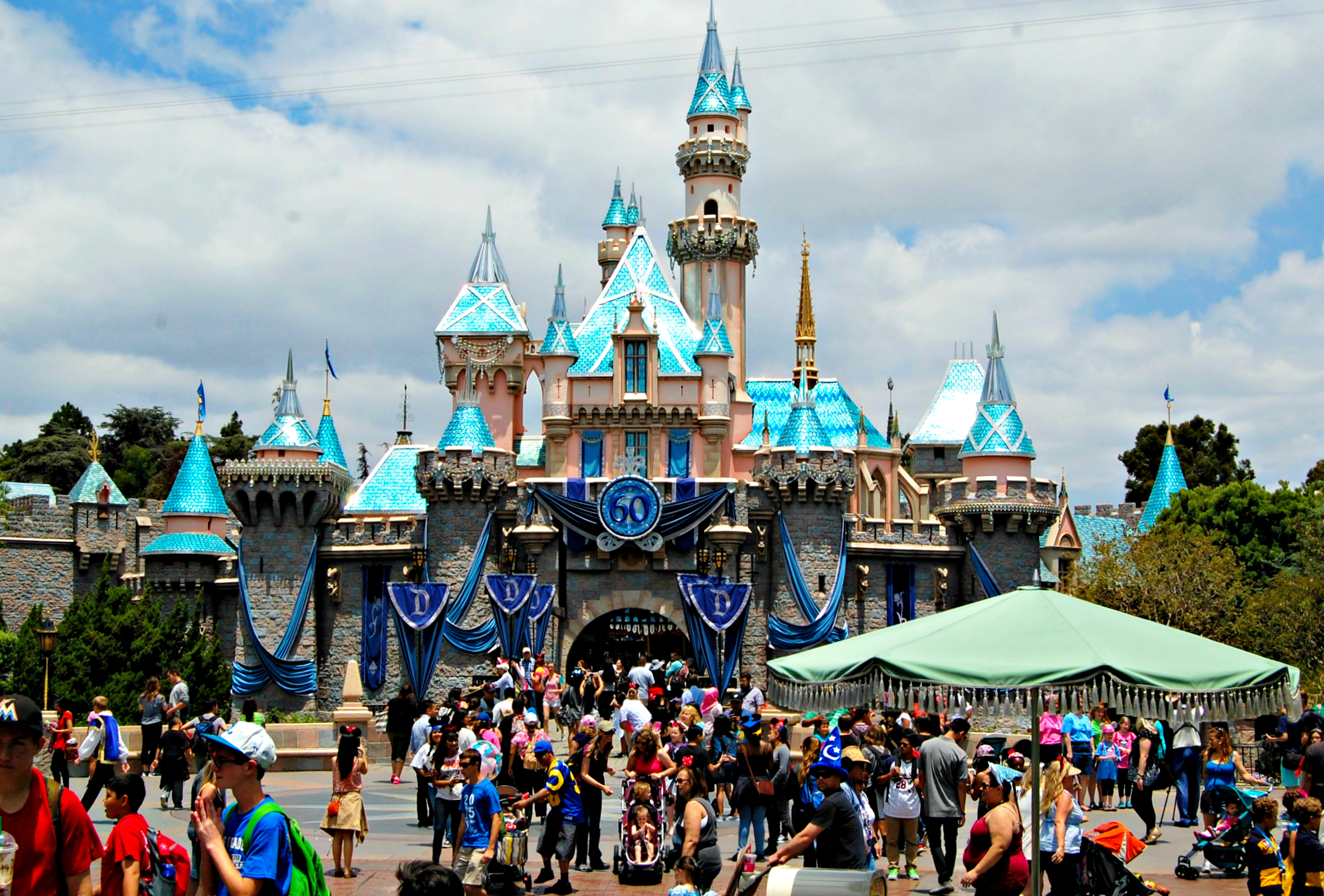 But of course, the main attraction comes at the end of that street: the castle. The focal point where princesses dwell, fireworks dance, and tourists take more photos than any other landmark, I think, ever. Maybe if I had discovered Disneyland first, Orlando’s masterpiece at the end of Main Street would have come across as gargantuan, even superfluous; but Walt Disney World is my home base, leading California’s original version to result in something that left much to be desired. In a word, it’s tiny. Maybe one other word; underwhelming (so sorry, California!). But the immaculate detail that Disney is known for is there for sure, and at night, Sleeping Beauty Castle takes on a life of its own, beautifully lit and alluring, despite its diminutive size. What it lacks in stature, the castle makes up in accessibility; you can actually take a tour through this one, something visitors to Cinderella Castle may only dream about (save for those lucky few that have spent the night in its sought after suite). Still, when it comes to castles, exterior aesthetics matter, and I found myself longing for the view of the Magic Kingdom’s towering palace. 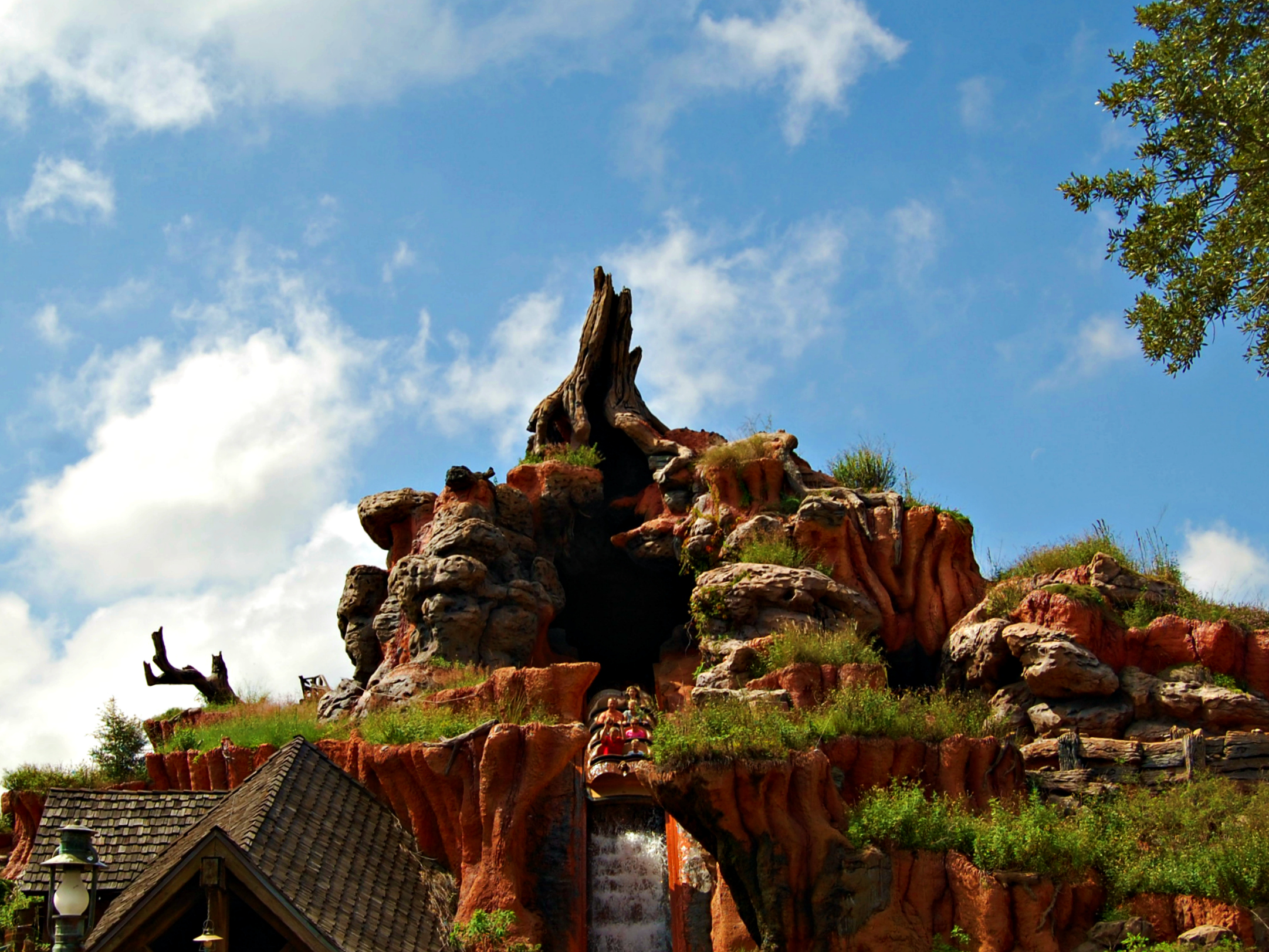 Disney’s trifecta of mountains: Space, Splash, and Big Thunder, are present on both coasts, and with an affinity for all three of them—especially Splash Mountain—I was eager to try them all. Unfortunately we were unable to hop on Space Mountain with our limited time (despite the fact that an incredibly nice family gifted us their FastPasses—wait, how did we miss riding this?!), but the resulting 2/3 experience was enough to do a decent comparison of the coasts. Thunder Mountain thrilled with its high speed and additional special effects that Orlando’s version lacks. Splash Mountain, though it doesn’t allow me to be seated next to Jesse, instead seating riders in tandem, offers a more thrilling experience—or so it seemed to a first-time rider—and definitely a wetter one (which, let’s be honest, isn’t necessarily a good thing). Still, and perhaps this was the newness of it all, I found myself much more transfixed by Disneyland’s version of a ride that remains one of my Floridian favorites.

Winner: Disneyland by just a smidge, and only comparing 2/3 offerings.

The Matterhorn, towering over Fantasyland

Hovering high above Fantasyland is the ominous snow-capped mountain of The Matterhorn, and inside its tracks, a terrifying yeti awaits. I find it odd that a ride with such a truly scary inhabitant would take up residence in Fantasyland, where everything seems so good and pure, but since it opened in 1959, only 4 years after the original park opening, I suppose the planners had their reasons. Though the Matterhorn offers a spectacular focal point to park-goers, and I enjoyed gawking at it from different angles of the park, I would never, ever take a spin on this again. It’s not worth its wait in line, I say, to have your bones rattled in this medieval torture machine. Sorry, Disney. The yeti was pretty darn impressive, though.

Winner: No one, my body hurts.

If comparing like attractions, the award would easily go to Expedition Everest, but Disney’s Animal Kingdom isn’t a player in this game, so yeah. No one wins. Except, maybe, my chiropractor. 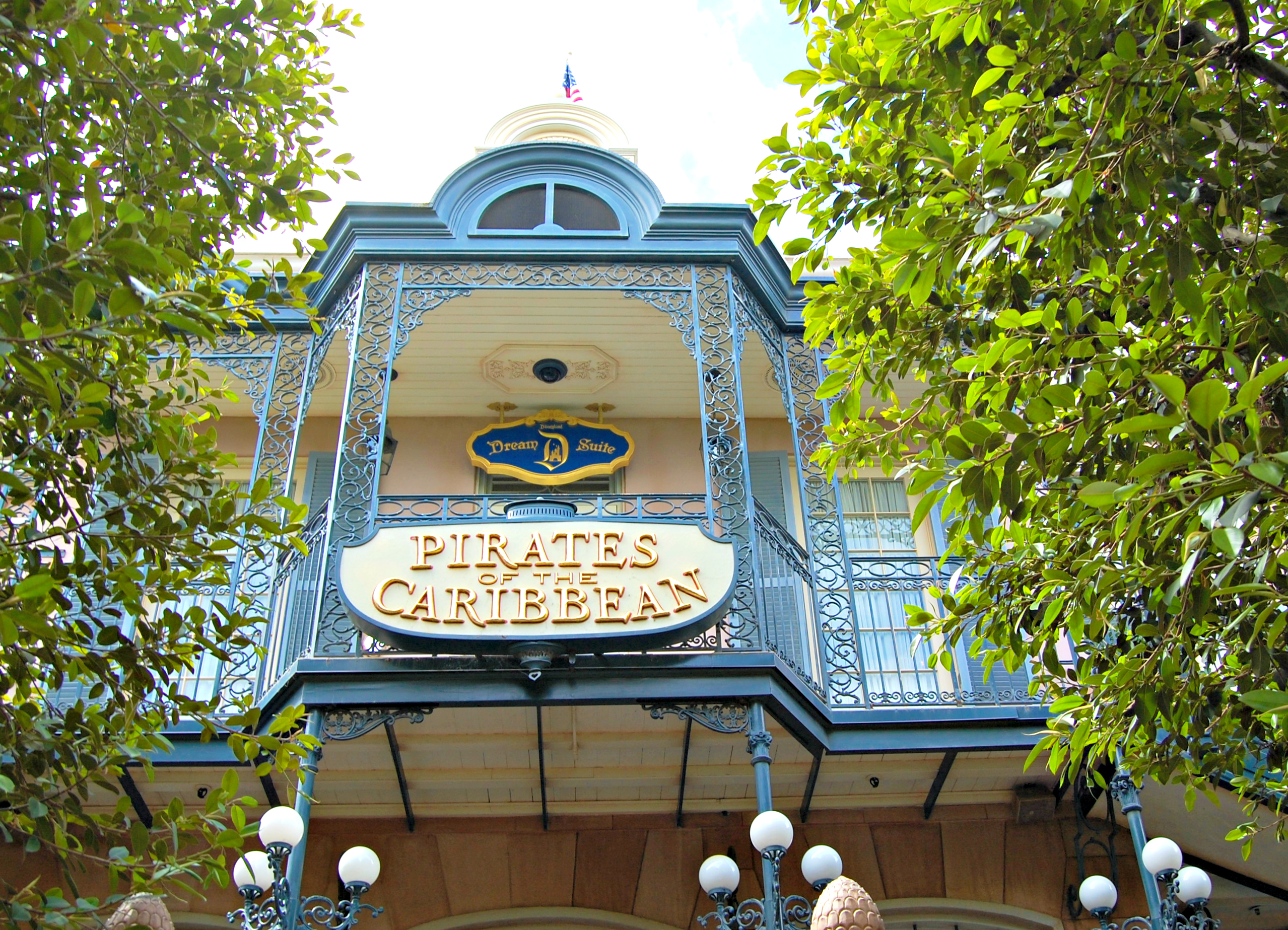 Disneyland’s entrance to Pirates of the Caribbean

Pirates of the Caribbean

I’ve always heard that California’s version of Pirates was superior to the one I know so well. The Disneyland version has the (sad) honor of being the last attraction that Walt Disney himself personally worked on, and, at 15 minutes and 30 seconds long, is the lengthiest of all four Pirates attractions (you can also find one in Disney’s Magic Kingdom, Tokyo Disneyland, and Disneyland Paris). I noticed the additional length, but not in a “is this over yet?” way. The additional drop was a thrilling plus, though our particular ride was unfortunately thwarted by a duo of teenage girls who would just not. stop. talking. The. whole. ride. Still, the spirit of Pirates was alive in California, and it was felt loud and clear.

Winner: Disneyland, by a drop. 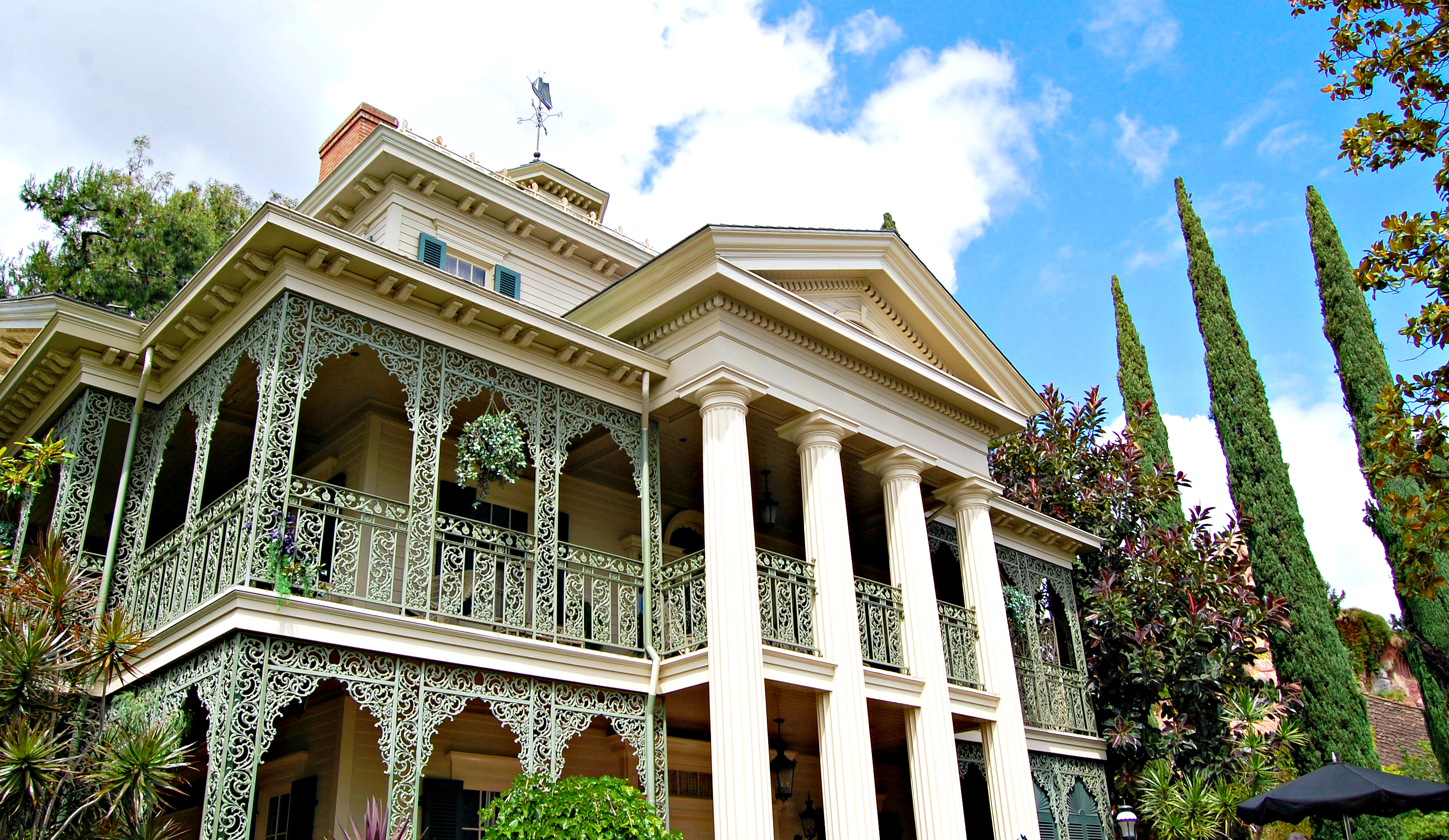 Disneyland’s version of the Haunted Mansion, the original attraction, is a sight to behold. With its antebellum aesthetic and front porch entry, it’s almost believably a real residence. This entry, as opposed to the Magic Kingdom’s “underground” queue, makes true use of the famous stretching room—it’s an elevator. In Walt Disney World, the stretching room is an illusion, not truly moving, just used for effect (the ride building is actually located behind the Mansion, rather than beneath it). In Disneyland, you’re brought to the ground (or sub?) level of the building, and deposited right into the ride queue. The layout of this actually works in a way that’s much less stressful than in the Magic Kingdom, where people push and prod, trying to be the first to board a Doom Buggy. There’s no crowding here; the boarding process is seamless and the transition from your place in line to your vehicle is stress-free. Disneyland reigns when comparing the actual ride-through, too, where the interior is mostly identical, save for a few spooky additions on California’s part (like the much-talked-about Hatbox Ghost). It’s these chilling additions that make Disneyland’s version slightly more superior, in my opinion.

Winner: Disneyland, for its exterior, easy queue, and bonus extras.

You don’t have to actually board one of its boats or take a cruise through singing doll-ville to declare a clear winner of this attraction. It’s Disneyland. I mean, just look at its exterior. Like, whoa.

What Disneyland is Missing

The Fantasyland upgrade in the Magic Kingdom is by far the most impressive recent addition to the Disney family, and California’s version is surely lacking. However, with the recent announcement that Disney would be pumping a billion dollars into renovating its park(s), I expect that all to change in the coming years. 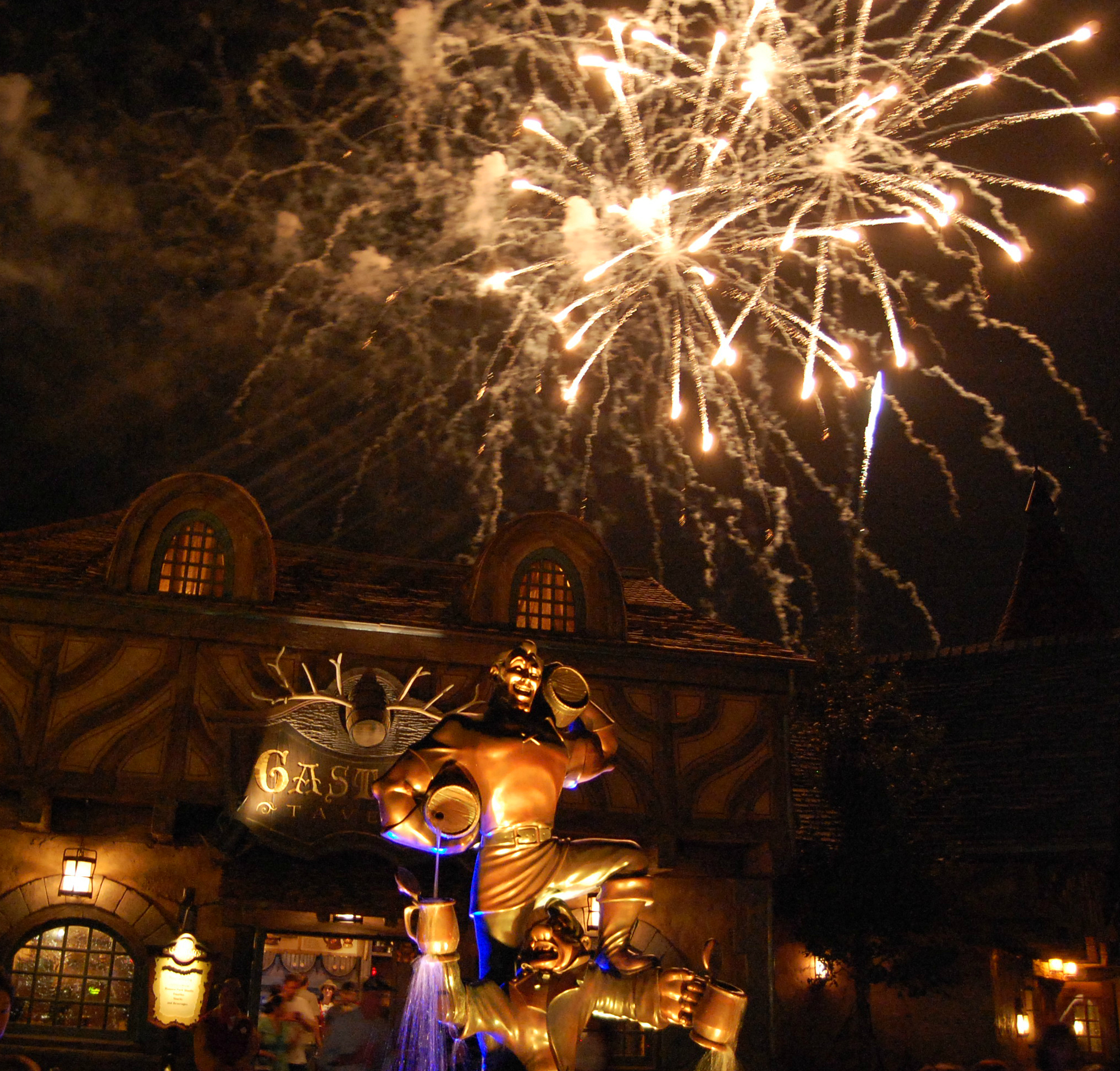 Gaston’s Tavern at the Magic Kingdom in Walt Disney World, part of the new Fantasyland expansion

What the Magic Kingdom is Missing

Well I’m not going to say the Matterhorn. But still, there’s a certain grand atmosphere that the mountain in the middle of the park adds, not to mention that a monorail goes through the park (though it’s hard to complain, when Orlando’s resort has four parks, one of which does have a monorail running through it). But one ride that will be noticeably missing on all future visits to Orlando is that of Indiana Jones; with the same technology as the east coast’s Dinosaur, one of my top 5 attractions, this addictive thriller has everything I love. Excitement, but not like, vomit-inducing movement, special effects, darkness, INDY. Not to mention the famous giant boulder. Seriously…can we get one?

Disneyland’s version of Tomorrowland (which I also preferred)

And the winner is…

Well, I wasn’t expecting that. To the tally, Disneyland is the clear winner. But a visit to Disneyland doesn’t feel like going home. I don’t know the sights, sounds, and smells of every square inch of its property. I haven’t had the privilege of wandering its desolate lands late at night, and I don’t have years and years of memories set within its gates. I do have all of those things where it concerns the Magic Kingdom, my home away from home, my keeper of memories.

Coldie but goodie.
Eloise gets most of the spotlight these days (how could she not?!) but I think we’re still pretty cute. 👩‍❤️‍👨❤️
Presented without comment 🎀
So rare to get a photo with (almost) no other people in it.
My love, my light. 💕
Eloise recently got very into Cars. 🚘 I have to play that Sheryl Crow song at least like 4 times a day. She spent the remainder of the day talking about the “yellow car.”